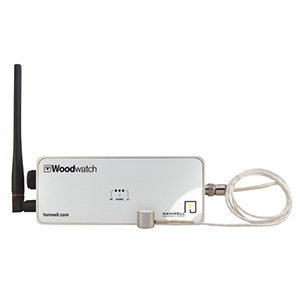 WoodWatch has been designed specifically with Acoustic energy (AE) functionality and is a non-destructive tool to indicate the risk of mechanical damage to wood.

Buildings, structures and individual items are in a constant state of decay. In the particular case of wood internal stresses are considered to be one of the main factors which contribute to deterioration. Physical changes in objects, and hence damage, are induced by various factors in their environment such as variations in temperature and relative humidity (RH). In order to manage and control the changes in conditions preventative conservation techniques can beneficially be applied.

AE is defined as sound waves released due to micro-damage in a material undergoing deformation. These sounds cover a frequency range which extends far beyond human hearing capabilities. Despite its unique characteristics AE monitoring has not been used to routinely record stresses in wooden cultural objects and works of art until now.

Energy released by micro-damage events passes through the material as ultrasound waves, and is detected at the surface using a wide band acoustic detector. This sensor utilises the piezoelectric effect whereby electric potential is generated from applied mechanical stress. The resulting electrical signal is divided into two paths; a high frequency (HF) band resulting from the process of crack formation, and a low frequency (LF) band, which often relates to external environmental noises and events. Damage is detected when HT energy is detected with no LF energy present at the same time.

Data is continually collected from the WoodWatch acoustic detector and a processed measurement periodically logged or transmitted via radio. The cumulative energy over a period is a measure of the total energy emitted by damage events providing a non-instructive method of assessing actual deterioration in real-time. Accompanying software for WoodWatch enables users to view graphs detailing AE, RH and temperature levels and hence to investigate and understand the relationships between these variables. The acoustic emission sensor is a major step forward in a simple and objective measurement of physical damage for a broad range of historical materials and deterioration mechanisms. It has considerable potential of becoming an innovative ‘problem solver’ in the case field of the preventative conservation and building maintenance.